I have used the Bic ballpoint multi-pen for a while starting years ago, and now more recently it is almost the only pen I use.  I do a little bit of color coding in my Filofax, but it's not set in stone.  I mostly just like to have the option of using a different color ink if I want.  The Bic multi-pen comes with black, blue, red, and green inks.

I have been intrigued by all of the talk in the Filofax world about the Pilot Coleto multi-pen.  It's a customizable pen that allows you to buy the pen body and then choose the colors you want to use with it.  The best part about this pen for me is it holds gel ink cartridges.  I'm a big fan of gel inks over ballpoint.

So I decided to bite the bullet and invest in one.

Choosing the pen body was a little bit overwhelming, because there are many styles and colors.  I opted for a less expensive gray body that holds five inks (you can also chose pen bodies that hold 3-inks or 4-inks).

I chose a multitude of colors for the ink cartridges:  brown, orange, blue, green, pink, orange, black, red.  I also chose a pencil cartridge and an eraser cartridge.


My package of pens arrived in the mail today (I ordered them Thursday, so that's a 2-business-day turnaround, which is very reasonable.). 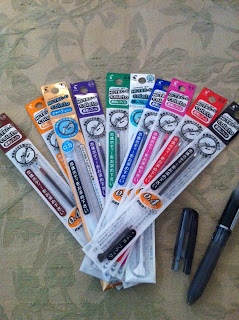 ﻿
It didn't take long for me to load the cartridges into the body (I did watch a couple of YouTube videos -- without them I would have been a little lost).  For this first test I chose black, blue, green, red, and orange cartridges.
Oh, one other quick note:  I got the .4 size cartridges.  They also come in .5 size.  I have read a lot of comments about the .4 size being too scratchy, but I wanted to take the chance because I'm looking for a really fine point for the very narrow lined pages in my Filofax.
My first impressions were lukewarm.  Initially I had trouble figuring out how to get the pen to work -- once I chose a color to use and pushed the little lever down, I expected it to easily lock into place like the Big pen.  It has taken me many tries, but I think I have it working now.  It seems that I still have to retract an ink cartridge before I use another one, which is also unlike the Bic.  I may just not have figured out how to use it properly, so I am reserving too much judgment on that.
The ink colors seem to be fine.  And the .4 size tip doesn't bother me at all; in fact I think I may love it.  It doesn't seem to be too scratchy.  I did read a few reviews that complained that the ink had to be primed before each use.  I haven't experienced that yet, but again, I've only been using it for a very short time.
﻿ 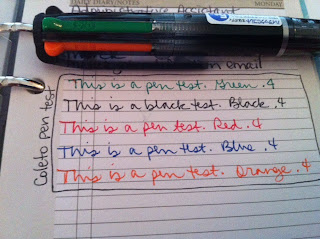 Overall, I think the Coleto pen is ok -- nothing to jump up and down about, which is what I expected (probably unfairly, I'll add).  Again, I think I will reserve judgment until I've used the pen more heavily.

I'll keep you posted on how the Coleto pen works out for me.

What is your favorite pen to use?