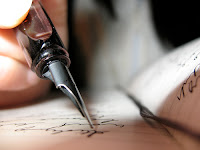 athena
This post is a part of the 31 Days To Build a Better Blog Challenge.  Follow my progress here.

I love everything related to journaling.  I love filling my notebooks, I love picking out my next new notebook, and I love re-reading from my past journals.  I also love to learn how other people journal, and if given permission, I love to read other peoples' journals.

I have read the journals and diaries of many famous (and not so famous) people.  They range from US Presidents to writers to criminals; from young girls to old men.

I am fascinated at how the casual writings of George Washington and Virginia Woolf are not that much different from my own.  We all write about our accomplishments and failures, our fears and complaints and wishes.

Here is a list of my favorite famous journals:

1.  The Diary of a Young Girl by Anne Frank
This diary is one that most everyone has heard of.  It's the diary kept by a young girl while her family was in hiding for two years during the Nazi occupation in the Netherlands.

2.  The Journals of Sylvia Plath by Sylvia Plath
Sylvia Plath was an American poet and novelist from the 1960s.  She was also known as Victoria Lucas.  She kept her journals from age 11 through her death at 30.

3.  The Reagan Diaries by Ronald Reagan
Ronald Reagan was the 40th US President.  During his two terms President, he kept a daily diary by hand, recording his thoughts and observations on the extraordinary, the historic, and the routine day-to-day occurrences of his presidency.

4.  The Civil War Diary of a Southern Woman by Sarah Morgan Dawson
Sarah Morgan began her diary when she was nineteen -- just nine months after the start of the Civil War.  Her record of the events during the war remains one of the most vivid, evocative portrayals in existence of a time and place that today make up a crucial chapter in our national history.

5.  The Diary of Virginia Woolf by Virginia Woolf
Virginia Woolf is one of my favorite authors.  She kept her diaries (all five volumes) from 1915 until 1941 and they contain her unguarded accounts of her writing efforts and personal life.

6.  The Broke Diaries: The Completely True and Hilarious Misadventures of a Good Girl Gone Broke by Angela Nissel
Angela Nissel was a poor and struggling college student at the University of Pennsylvania.  Her diaries, which started out on the internet (one of the first successful blogs maybe?), were a hilarious account of her struggles to feed herself and pay her bills.

7.  Water Cooler Diaries: Women across America Share Their Day at Work by Joni Cole and B.K. Rakhra
The Water Cooler Diaries is a collection of on-the-job "day-in-the-life" chronicals from hundreds of women.  This is a look at what each of their days looked like on March 27, 2007.

8.  A Day at a Time: The Diary Literature of American Women Writers from 1764 to the Present edited by Margo Culley
This collection includes diaries composed over the past two centuries by 29 American women from different classes, social levels, and ethnic backgrounds.

Do you have a favorite journal or diary to read?  Please share them in the comments section!

Email ThisBlogThis!Share to TwitterShare to FacebookShare to Pinterest
Labels: journaling