The One With the Tattoo

Isn't it funny how we go for so long thinking one thing, and then suddenly we change our minds?

That happened to me regarding tattoos.

I was never into the tattoo scene and never in a million years thought I would get one.  It's not that I was offended by them, or thought badly about those who had them.  I just always thought it was silly to mark your body permanently.  Forever.

I know you can have them removed.  I knew a girl once who was having one removed from her ankle.  And it looked painful!  All red and oozy and bandages had to be changed... Not something I fancied ever putting myself through, considering I am a big baby when it comes to pain.

I guess I looked at the permanent aspect of tattoos from the point of view of someone who constantly changes her mind about things, and can rarely do anything consistently (7-day whitening strips are still a struggle for me).  I couldn't imaging marking my body forever with something.  It's inevitable that I would change my mind, and then regret the tattoo.

Anyway, I don't remember exactly when my thoughts shifted from anti-tattoo to thinking-about-a-tattoo, and I don't remember why they changed.  I do think it was shortly after my 40th birthday.  I was going through a life shift.  My dad had recently passed away unexpectedly, my marriage was ending, I was dealing with the thought of aging... I was looking for change, I guess -- something to shock my system and to remind me that my life was not yet over.

Fast forward five years, to my 45th birthday.  At that point I KNEW that I wanted a tattoo.  I had been casually thinking about what design I wanted, and once in a while would look at pictures on the internet.

And then it came to me.

I had been struggling with my writing, and was really frustrated about it.  I knew I was letting a lot of head games get in the way:  my internal editor (brutal SOB that he is), my insecurities about what I was writing, my feelings of failure at taking so long with my novel (10 years now, SMH), my inability to even journal, which had been my happy place for years.  I knew that the head games were holding me back, and I had to JUST WRITE.

And I decided that was it.  Just Write.  I needed to see that reminder every day.  Why not as a tattoo?!

I found a place on the internet.  (I'm sorry, I've looked for it, but can't remember where it was.)  I entered the text I wanted, played around with the fonts a little bit, and quickly had exactly what I wanted.

I finally got around to making the "go" decision three months after my 45th birthday.  I told my husband I was ready, and we decided on a Saturday to do the deed.

We chose a reputable tattoo parlor in our area (my brother had been several times and highly recommended them).  I emailed them a photo of what I wanted, they printed it and made a template.  And before I knew it, I was sitting in a chair, the tattoo needle was marking the inside of my right wrist with black ink, and right before my eyes I had the most beautiful and meaningful tattoo I could have imagined. 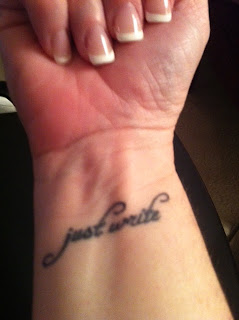 The process took 30 minutes or less, the tattoo portion was probably less than 10 minutes, and the pain was minimal.  People compare it to a bee sting, but I've never been stung by a bee so I can't confirm that.

I've had the tattoo for almost a year now, and I still love it.  I see it every time I write.  I'm so proud of it I could burst.

As far as it helping my writing, well, that's still a work in progress.  But I definitely know that it is influencing my writing, as well as other aspects of my life, and because of it, things are getting better and better.

August will be one year since my first tattoo, and I have plans to get another one.  Snowflakes on my left ankle.  I'll be sure to share it when it happens!

Email ThisBlogThis!Share to TwitterShare to FacebookShare to Pinterest
Labels: rambling